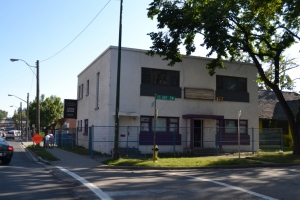 Originally, I planned to make this more of a housekeeping post more than anything else. Then I heard some news (in a gossipy sort of way) from one of my sources, which has yet to be confirmed. However, I feel confident enough in my source, that I will take a big leap of faith that this news is correct.

In my last post celebrating the one year anniversary of this blog, I made a short mention of the Gorilla House.

Near the beginning of the week, I happened to be going past the space that was occupied by the Gorilla House Live Art. I happened to have my camera with me, so I took advantage and took a photo of the space before the building exterior materially changed.

As you can see here, the building is surrounded by metal fencing. The signage that used to be there, has come down. Otherwise, for the most part, the exterior appears to be similar to what it has been since it was still a used bookstore (which if memory serves me correct from the occasional visits I made when it was operational, smelled like cat pee).

As you can see in the photo above there is a large stack of drywall ready to be installed and a large counter of some sort, is currently under construction.

In my last post, I indicated that the building is planned to be a sushi bar. Shortly after I took this photo, I asked an older Oriental man who poked his head out the door what the plans were for this site. He corroborated the information that I heard, which is that it will be a restaurant, although he did not state what type.

So there you have it. The far too common end to a short-lived art space in the city.

However, all is not lost.

Soon you will be hearing of a new organization called Rumble House.

This is the same organization, except that instead of conducting “art battles” as they have done in the past, the new organization will conduct “art rumbles”. I guess they wanted to use a less combative terminology.

The concept is still the same.

I have attended a few of the weekly events over the past year. I had intended to go previously, but always remembered too late in the evening or after the fact.

It is a very interesting concept.

Here is how it works, as best that I can determine from the few times I have attended as an observer (not a participant), and I should also state that I have never attended a full event from start to finish:

In this respect it is a lot like the national Art Battle that was held recently at C2 (the old Museum of Contemporary Art – Calgary) a few months ago.

Now for the news.

As mentioned above, the same people behind the Gorilla House are now behind what will be called Rumble House.

I hear that right now as I write this, after being homeless for a number of months, a new space is under development. It is my understanding that it will soon be open. 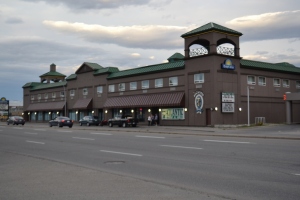 It is an interesting space that they will be moving into. The windows to this space connected to the Day’s Inn Macleod Trail location have been covered up for quite a few years, in fact I don’t recall this space being occupied – ever. That says a lot, as the building has been around for quite a while (maybe 10-20 years, maybe longer).

For a number of reasons, this could be a very challenging location from a real-estate perspective to successfully lease out. Here is why:

However, these are the same factors which potentially might make it suitable for this type of facility.

As this facility is currently used mostly in the evenings there will be people in the immediate area. It is possible depending on the nights that the Rumble House is operational, that there might be some spillover patrons stop in from the neighbouring Atlantic Trap and Gill and the hotel above.

It is centrally located, with easy access by train and car which is ideal for a destination facility that is active outside of regular business hours. These are the same factors which made the Trap and Gill successful. It could potentially be a win-win for everyone.

I wish them success in their new venture.