The story today relates to a report issued by the Provincial Auditor-General earlier this morning. It is a difficult job being a politician. As a result, I will try to remain as objective as I am able.

However, as seen in this article from yesterday’s Globe and Mail, it would seem as if there are some issues that still linger from her time as premier. That story ran on the same day (yesterday) that the embattled Redford resigned as an MLA and from politics.  Concurrent with her resignation, she took the opportunity to pen an op-ed article in both the Edmonton Journal and the Calgary Herald.

I thought today would be an opportune time to visit Bow Valley College and view some artwork.

The specific work I was looking for was created by the American artist Franz Spohn in conjunction with a residency he had at the Museum of Contemporary Art – Calgary in 2012 (now rebranded and known as Contemporary Calgary or more specifically the MOCA location which is known as C2). This residency corresponded with the annual Children’s Festival held every year during May. If I was to make a reasonable speculation, it probably had something to do with Calgary 2012 as well.

It was prominently displayed near the food court, at the top of the main stairwell, on the +15 level at Bow Valley College. Sadly when I got there, all I could find was a plain blank, white wall that contained no evidence of what once hung there instead. As a result, I had to search for a photograph I took of it last October, which is illustrated above.

Two large gumball portrait mosaics were created as a result of the MOCA-Calgary residency. The first of the two portraits completed was of Calgary Mayor, Naheed Nenshi which was followed up probably the following weekend with a portrait of Premier Redford. Each portrait contained 18,225 coloured gumballs and both politicians assisted in the creation of their respective portraits, with a surprise visit by Nenshi to assist on Redford’s portrait. At Bow Valley College the two portraits faced each other. Both were located at the top of the main stairwell – one on each side.

These two artworks are an excellent example of a community building exercise – creating partnerships with other organizations; coordinating a collaborative engagement between artists and community members; engaging those in the community who might not otherwise visit a gallery; and developing new audiences. This is what galleries must do regularly as part of their programming and in terms of developing creative places and spaces.

These artworks came to be as a participatory project whereby individuals helped build the artwork. I attended both events and I was pleased to see how many children participated, often with their parent’s or grandparent’s assistance. It was a fantastic thing to see.

Because the two portraits were not on display when I visited Bow Valley College today, I stopped to ask a lady who was entering a nearby office at the same time as me, “what happened to the Nenshi and Redford portraits?”

After a bit of thinking on her part, she said that she though that the Redford portrait might have got damaged and had to be removed. She assumed that maybe the Nenshi work must have been removed at the same time, before it got damaged as well. I have no idea whether the information that she gave me is correct. I am just relaying comments that I received from a random stranger who works in the building. When I asked about timing, she guessed that this probably happened sometime before or during the summer.

I have reason to doubt the veracity of her comments. 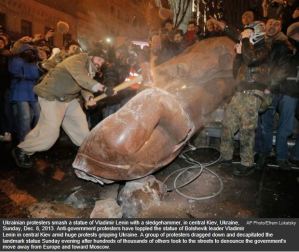 Given this context, the parallels between this situation and a recent news story from December 2013 strikes me as interesting. They are definitely NOT related and are on a completely different level in terms of issues surrounding each other. Regardless, the two events have an interesting dialogue with each other nevertheless.

As one would know, if they follow the news even remotely, there have been some recent troubles in the Ukraine. The news story I am talking about pre-dated the Crimean Peninsula Crisis that started in late-February of this year, and relates specifically to a sculpture of Vladimir Lenin that once stood in the central square of Kiev which was toppled in early-December 2013. This was long after the breakup of the former USSR, into independent states, when most of this type of action of toppling Lenin sculptures occurred. Here is an AP photo and a caption that I copied from one of the news journals or papers that used it, for reference more than anything else.

As I said before, politics is not easy business and can be very messy when things go sideways.

I suspect that at some point in the future it will be on display once again. Where and when is the big question.