Yesterday afternoon I was in Sunnyside as a work crew was setting up for ContainR.

ContainR is an initiative with a Calgary connection, Nicole Mion.  It started during the 2010 Winter Olympics in Vancouver.  It is also part of the Fluid Movement Arts Festival, which is organized by Springboard Elevating Performance Company.  There are a number of events connected to the Fluid Festival around the city between October 16-26 which mostly take place in theatres and exhibition spaces.

ContainR opens this weekend.  The interesting thing about this event is that they are utilizing shipping containers that are often seen on railcars, trucks and ships.  They have been repurposed for alternative uses.  According to the website, this “festival within a festival” (for lack of a better phrase) is described thus:

This Saturday there will be a number of events at their temporary location at 2nd Avenue and 9th Street NW which is about two blocks away from the Sunnyside LRT station.

For those with a creative bent, there is a chair-making competition using hand-tools and prizes given for beauty, comfort, originality and a people’s choice award.  The wood is provided and all that is required is the work to transform the material into something interesting.  Registration takes place on Saturday morning between 7:00-8:00am with judging taking place at 4:00pm. 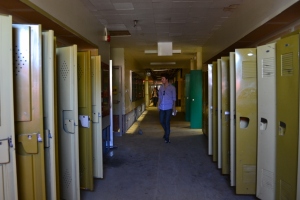 Later today, since it is after midnight, Phantom Wing will open to the public for the weekend only (Tuesday, September 24 – Sunday, September 29, 2013) as a temporary installation prior to demolition.

Some may recall Wreck City.  As a refresher, it was a group of homes along one street at the bottom of McHugh Bluff, in Sunnyside.  The ten (maybe fifteen) older homes dating mostly to the early 1900s were slated for demolition.  With the approval of the developer, a large temporary installation based exhibit took place in the vacant homes.  The event took place last April and the homes have all been demolished since.

This time around Phantom Wing is doing the same thing, except that instead of homes, the artists will be using a school addition built in the 1960s.  I had the chance to view the site in mid-August and the picture I have chosen to use to illustrate this blog post is from the second floor showing the lockers as taken during my visit in August.

On the Phantom Wing website there is a more recent photo of the same subject matter, from the same general area.  In a way these two photos serve as before and after photos – or at the minimum a taste of what to expect this weekend.  From the vantage point that the Phantom Wing photographer chose to use, it would appear as if the two artists (Guy Gardner and Sian Ramsden) are using the locker doors as their medium (http://phantomwing.files.wordpress.com/2013/09/img_5232.jpg) in an installation.  Interestingly, whether intentionally or not, they seem to have borrowed from art history to use the locker doors, through the appropriation of Marcel Duchamp‘s painting Nude Descending a Staircase (No. 2), 1912 which is in the collection of the Philadelphia Museum of Art (http://www.philamuseum.org/collections/permanent/51449.html) as inspiration.  It is also worth noting that the photo on the Phantom Wing website presumably is a work in progress, so it may have changed materially since the time the photo was taken on or before the 16th.  Regardless of this, the choice of inspiration is pleasantly surprising given my knowledge of Calgary and its artists, even though the Duchamp work holds a pivotal place in modern art history.

If this is indicative of the work that will be on display, it should be a project worth checking out.

There are other artists involved that should make this event quite different from the event held at Wreck City, even though the curators for the most part are still the same.

Phantom Wing is located in the new wing of the King Edward School which is being developed by cSpace Projects as an arts incubator.  The address is 1720 – 30 Avenue SW. 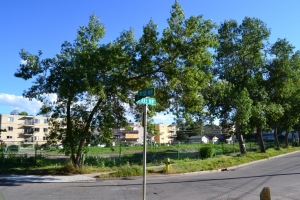 Last night was the final walk-through for a new large-scale arts project forming on the horizon – Phantom Wing.

Phantom Wing is a project that was initiated earlier this month by cSPACE projects – the good folks connected to the Calgary Arts Development Authority that are developing the 100-year old King Edward School into an arts incubator scheduled to open sometime in 2014.  The Phantom Wing project incorporates a physical space slated for demolition.  It is large addition to the King Edward School built in 1967 including the library, approximately ten classrooms and offices, all enveloping a small private open-air courtyard.

cSPACE contacted the people who put together the Wreck City project to coordinate this project as well.  Calls for submissions will be accepted until the 26th with the event to take place around the time of year that ArtWalk has traditionally taken place – the official dates for Phantom Wing are September 24-28.

This prompted me to make a visit to the Wreck City location, since both projects involve physical built spaces slated for demolition.

After the Wreck City event ended, very little has been heard from or about it.  Wreck City was an event held between April 19-27, 2013 and because of the nature of the project this is not surprising.  Once the project is over, and outside of an annotation in a peer-reviewed history paper or a line entry on a curriculum vitae for those artists involved – most people will forget the event even existed.  This is unfortunate, but more often than not – a reality.

Approximately 80-90 artists/performers/arts practitioners of various stripes converted nine residences (and/or other built spaces attached to the properties) out of a row of eleven old homes, that were slated for demolition – into temporary exhibition spaces and performance venues.  These eleven houses or small apartment blocks, dated mostly from the early 1900s, were all located along one street facing the base of McHugh Bluffs in Sunnyside, close to the C-Train station.  It is a bit of an awkward place to find when driving, as there is only one way in and the same way out.  This makes for a quiet location with a small park across the street.

No doubt, this quiet location close to amenities was appealing to a developer. In the typical Calgary way of progress, the developer purchased all the properties and is looking to build a new beige four-storey, 115 unit, residential condo project scheduled for occupancy in fall 2015.

So what has happened since then?

All the eleven buildings have been razed and the debris removed.  There are a few divots left in the ground, where homes once stood and the grass has been allowed to grow.  There is a construction fence surrounding the site and beyond that, the developer is probably waiting for enough deposits to come in so that they can start building.

It is now a quiet memorial to what once was.