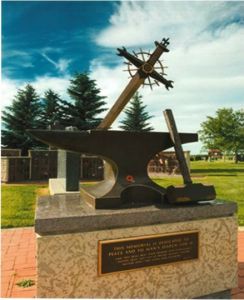 I am going to keep this short and sweet.

Today a press release was issued by the City of Calgary Police Department seeking assistance to find the perpetrators who removed, without authorization, a large bronze memorial from the Mountain View Funeral Home and Cemetery just east of the city. It was located in the Veteran’s Memorial Gardens and was taken at some point between the evening hours of Thursday, June 25, 2015, and the morning of Friday, June 26, 2015. I have copied one of the photos that is attached to the press release.

From the police report it would appear as if this was something that required more than one person to do.

There is not much I can say about this beyond what was said in the news release, except to say that whomever was involved in this plot has reached a certain level of ascendancy in douchebaggery that is difficult to match.

Stealing something that is meant to honour the dead (regardless of what one thinks about the act of warfare) – the very people who fought for our freedoms, is not cool.

If you have information or know someone who has further information about its whereabouts or those that are involved, please contact Crime Stoppers, Calgary Police Service at 403-266-1234, or Constable Beierbach in District 4 at 403-428-6400.

Let’s find these douchebags and put them behind bars where they belong.